I meant to write about my adventures trying to local source christmas dinner, but I have to say that it turned out to be less of an adventure than I'd hoped.  If you take the time, local foods are just so easy to come by in Portland that there was no grand adventure involved.  A few phone calls, a trip to the farmer's market, and a run by New Seasons got me 95% of all my ingredients from local sources.

By "local" I mean Oregon.  I know there is a lot of debate about "local" means.   For this meal, local meant Oregon.  Nothing imported from the mid-west.  No Brazillian avocados.

"Local" also means seasonal.  Because it's mighty hard to find local strawberries in December.  Your choices are automatically limited to what is in season.

For Christmas dinner I got two specific requests--artichokes (from Hazel) and prime rib (from Kim and my dad).

I had intended to go "off season" and make an artichoke custard with pepper bacon as the first course, just because it was a special request and I'm so happy that my eight year old daughter loves archichokes.  The prime rib would be easier.

For each of these, the ingredient list was short and easy.  I had only a few concerns--

With this list in mind, i headed out to the last farmer's market of the year at PSU.

The PSU farmers market is the largest one in Portland.  It attacts vendors from around the state every weekend to provide an amazing variety of food and food related stuff.  The final market is oin Dec 19, which makes it perfect for christmas dinner shopping.  Normally, we shop at the St. John's market because it is so close to our house, but it had closed a while ago and the PSU market was most likely to have the variety of things I needed.  Surprisingly, the market was much busier than I expected.  A few years ago I came to the last market of the year only to find a handful of vendors huddled up in one corner of the green selling whatever leftovers they had for half off.  This experience was much different.  you would be hard pressed to think the market was closing it was so busy with shoppers and full of vendors.

I immediately wished I had written a shopping list.

Wandering around the PSU farmer's market is like walking through a savory candy store.  Everything looks so good, you want to buy a little of everything.  Damn those TV chefs who keep saying "buy whatever is freshest!" Everything is freshest here!  Fresh is not a strong enough criteria.  And without a list, I was soon lost, trying to remember what I was there, oogling the fresh crabs, sunchokes, soft goat cheeses, asymmetrical loaves of new bread, mountains of chantrelles on open tables, wine tastings, tri-tip roasts from local beef ranchers (buy one get one free), buffalo steaks, hand made pork sausage, heirloom carrots in a rainbow of colors and shaped so strangely you would never guess they were carrots.

It is a dangerous place.

Back to business.  Start with sometime simple.  Chop had a stand and they could be my complete charcuterie solution.  Next year I'll make my own, but this year it's chop.  Chop used to be Viende Meats.  But new ownership changed the name and kept the product as good as ever. The Pheasant, Sweetbread and Prune pate was outstanding.  As was the Hazelnut Pork pate.  I got both.  To compliment the softness of the pates, I also got a dry aged hard salami.  Fraga Farms contributed a Chipotle Farmhouse goat cheese that was soft on the front and hot on the back in just the right amounts.  It will go well with the meats.

Next up was sweet potatoes and I couldn't find a single one!  But there were so many other types of potatoes that I had to get a small bag each of Purple Peruvian and German Butterball.

Inspired by a meal at Beast a couple weeks ago, I could not pass up a few handfuls of brussel sprouts.

Twelve eggs and some really nice looking pepper bacon from Sweetbriar Farms would help with the custards.

What did I not find at the farmer's market:

Milk--Norris creamery is not selling milk anymore.  Instead they are focusing on butters and cheeses.  That meant that I had to go with Horizon Organics from New Seasons.

Prime Rib--This would have had to be special ordered months ago.  Even after calling around to Ford Farms and Deck Family Farm, I could not find anyone who had a prime rib on hand.   Again, New Seasons delivered with a nice 7 lbs standing rib roast from [farm].

Butter--Although I could have bought this from Norris creamery, I already had some Tillamook butter at home.

Vanilla--Creme bulee certainly does not need these.  But I eventually decided to go with a more traditional style rather than a flavored custard like pumpkin.

Seasonings and Spices--these all need to be imported.

Onions--I already had some left over from what we bought at the Pumpkin Patch farm on Sauvie Island.

Artichokes--I decided not to do this.  Why?  Because I could not find sweet potatoes.  Without sweet potatoes I needed something else to go with the prime rib.  Baby carrots and brussel sprouts fit here.  But then I had 2 bags of very nice potatoes to use and no wher efor them to go.  SO, instead of artichoke custard, we are having a sort of potatoe custard (ala Richard Olney) for the starter course.  And we're back to seasonal!

Any type of green that I could use to make a salad--this was completely out.  The green salad got dropped for lack of seasonal support.

I added local honey to the creme brulee because I like honey more than sugar.

Here is how it all worked out: 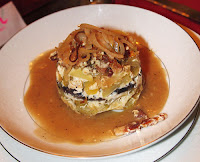 Non-local note: at the last minute I made a beef stock gravy to go with this which was    unplanned and therefore used flour and stock from wherever. 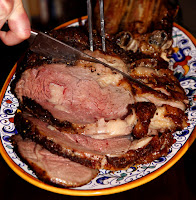 Non-local note: Salt and Pepper is impossible to find local sources for.  After looking for a long time, I have not been able to even find a pacific sea salt.

Honey from the honey guy who comes to Diane's house

Non-local note: Real vanilla is another thing that is impossible to find locally.   The sugar topping also was from somewhere else.

Drinks: Wine, bourbon, coffee, and everything else were all not local.

Overall, I was able to find most things locally.

The question started to become less about local vs. not-local, and more about local small-farm vs. local industrial.  For instance, Organic Valley is a huge operation, but it is mainly local producers.  Does this still count?  Tillamook Creamery is another huge yet local operation that distributes nationally.  Buying from Country Natural Beef at New Seasons is not the same as buying from Ford Farms or Deck Family Farm.

But for Christmas dinner, I put these extended philosophical issues aside and just enjoyed my time with the fam.  That, after all, is the best kind of food.