Every time I cook, I use some kind of oil or fat for something.  There is always some kind of lubricant needed, especially in saute.  With a nice braise, maybe you can get away with no added fats.  But who really makes pot roast every night? Not me, and that is fo' sho'.

There are certain things in cooking that we just can't do without and we cannot get locally.  Salt could be made locally (although I haven't found any).  Pepper is impossible since it is the dried berries of a jungle plant.  Most spices, in fact, come from warmer and dryer places than Portland.  Coffee, which most Portlanders love, comes from half a world away, literally.  Tea too.

So what to do about cooking oils?  Well, I found a list of 4 olive oil producers in Oregon.  Just as the wine industry has migrated north into the Willamette Valley over the past decade or two, so is the olive oil.  The Willamette Valley's Mediteranean summers have worked out really well for wine makers.  Since olive trees love to grow in the same places grape vines do, there is a lot of potential for the olive oil industry in Oregon.  However, the industry is still very small.  So small, in fact, that the Department of Agriculture is not even tracking it.  The 2007 census showed 8 farms with a combined total of 13 acres.

Of the four farms, only one close enough to Portland to make it convenient.  So, that is the one my lazy self focused on. 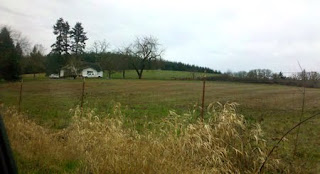 Belle Ragazze farm is just outside of Portland in Yamhill, OR.  Kim and I drove out to get some olive oil this weekend.  It was a longer drive than I thought, but worth it.  Meeting Hank and his wife was a real pleasure.  They are the nicest people you could hope for and told us a lot about the nascent olive oil industry in Oregon.

As it turns out there are about 8 olive oil farms in Oregon.  Belle Ragazze is the second largest with 5 acres of trees.  That's right, only 5 acres.  The largest producer is Red Ridge Farms, and he has about 13 acres now.  This is an industry in its infancy.

None of the farms have been around for more than a couple years, and it has been a hard couple years.  Abnormally cold weather this past December wiped out almost all of his baby trees.  The previous year was no different.   After all the work of planting and tending 3000 new trees over the summer, it looks like they all may need to be replaced.  I can't imagine how disappointed Hank and his family must have been.

The story is the same for all the growers in Oregon.  Even in the south, unusually cold winters two years in a row have decimated the olive farms.  It takes years before an olive tree can start producing olives, and each time a cold snap happens the timeline for the entire industry has to restart.

I was impressed by how brave these olive farmers are.  They're creating their own future and attempting to build an industry, all on speculation and a lot of really hard work.

Until things start growing better, all the olive farms are getting their product from California.  Some import olives, and some import oil.  All are private labeling the oil and selling it direct.  For now it's all about generating awareness and establishing a market.  When the trees start producing olives in a few years, then they will be pressing their own olives grown in Oregon.  So for now, it's more of a regional product than a local one.

Hank is not currently selling at the farmer's markets or in any stores, but hopes to in the near future.  If you can't make the drive out to Yamhill county, he does offer to mail your order to you.  Bottles are $15 for 500ml.  This is a great reason to buy a new bottle of Oregon olive oil.

Here is a 4 minute video from Red Ridge Farm of how olive oil is made.

Other Local Cooking Fat Alternatives
If you are going for local and need to lube your food, there are some other ways to go.  These aren't as healthy as olive oil, but here are a few ideas:

Use butter.  This is the easiest way to find local cooking fat producers.

Use nut oils.  This a great one because nut trees grow all over the place in Oregon.  Usually nut oils are reserved for salad dressings or specialty dishes.  However, this does not need to be the case.

Use bacon grease.  I personally like this one a lot.  Local pork is not hard to find.  Buy some bacon, save the drippings, strain them to get any grizel out, store in the refrigerator for as long as you want, and use sparingly for saute and other hot prep needs.  This is especially good when making scrambled eggs for the wee little people in our lives.  It is also really good when you saute white fish, like cod.  You can't go wrong, because everything is better with bacon.