Well, we used up all the salt I had made so I had to make more.  It's actually a lot of fun to make salt.  Fun might not be exactly the right word, but it is fulfilling.  Taking the ocean and turning it into something so basic to our culinary needs is really neat thing to do.  Everyone uses salt and we are no exception.  Plus I give it out to friends, they all enjoy it, and that makes it fun. 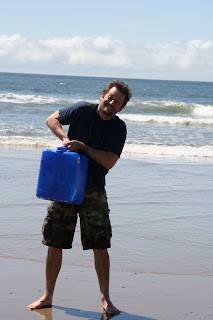 For this batch of salt, I went back to Oceanside (see this PDF--I went half way between 29383 and 29382).  The water quality report showed that the water had been tested just a month before and everything was looking good.  I'd considered going to Manzanita, Short Sands, or even Cannon Beach, but the report showed too much gook for my liking.  Oceanside was the best bet, again.  And this time the water was not sooooo cold.

I like to be old-fashioned and boil my salt, but one of the most popular ways to make salt is to do solar evaporation.  In solar evaporation, big shallow ponds are filled with salt water and the sun evaporates the water away leaving the salt behind.  Then the salt is raked up or scooped up.  This is how the famous Fleur de Sel salt is made.

(To see some great images of salt evaporation ponds, view this Flickriver Collection.)

I thought about doing this way, but I'd have to make a big shallow pool that could sit in the sun.  Besides the lack of sun, the only way I could think of doing this was to put some kind of giant tray on the roof of my house.  This might work, but then I thought about the number of birds that fly over my house.  And bugs.  And leaves.  And dust.  How in the world would you keep the water clean?  How do they do it in the big ponds where so much surface area is exposed to the open environment?

How Clean is Salt Anyway?
Some people have questioned how clean the water I use in my salt is, and all I can say is that it is as clean as I can get it.  I collect if from areas where the state water monitoring program says the water shows no trace of contaminants.  I filter out the sand and grit.  I boil it in a closed environment--in my house on my stove.  And salt is a natural anti-microbial.  So, in lieu of having it tested by a food safety lab, I'm guessing that it's pretty clean.

Do you ever think about the larger producers?  Where was that Kona Island sea salt actually made and how did they keep it clean?   French sea salt--got french bird poop in it?  People assume that just because they buy it in the store it must be okay, but why would you think that?  Salt can't be washed.  It can't be filtered.  It could be sifted, but some salt is pretty coarse grained--plenty big for all kinds of stuff to get through.

Where are these evaporation ponds?  What sea water is used?  Is it near a shipping channel?  Is it in the french rural coast where cow poop runs off? Anything could be in this stuff.  Nothing on the Das Foods  website mentions anything about the purity of the product or where it was made or what the process was.

Sunset magazine's One Block Diet blog gets in on this too.  Their salt making PDF article says that you need "a verifiably pristine sea, with sunny clear skies for evaporating".  Because of this they assume that homemade salt is probably not safe.  Then they assume that store bought salt is safe.  Really? Why?  Why should I assume that Morton or Das Foods has somehow found "pristine" sea water when they won't say anything about where their water actually came from.  Sunset also sites Michael Pollan's effort to make salt from obviously polluted water.  But come on, why would anyone do that (besides Michale Pollan).  Honestly, the Sunset article is doomed from the start.  If they are pulling salt water from the San Fransisco Bay, they have a pretty high chance of getting gross water. Although the California coast water seems to be getting better, SFGate.com says, "several local [Bay area] counties ranked among the highest for exceeding U.S. health standards for human or animal waste in California."

I did find one article on how salt is purified, but it was written by a chemical company as a white paper on how their system works better than "natural purification".  Even so, their description of the natural purification process is interesting.  One important thing to note is that this is written about creating table salt, not raw sea salt or the other types of "gourmet" salt.


In solar saltworks, salt is harvested from crystallizing ponds as a mixture of salt crystals and mother liquor containing soluble impurities in high concentrations. During storage, the content of soluble impurities is reduced, until is becomes constant after some 6 months. During this period, the humidity of the salt on the stockpile is about 3% but it drops down to approx. 1% thereafter. This phenomenon is known as "rain washing" or as "natural purification". This is the more accurate description since the purification occurs also when there is no rain at all...

Magnesium chloride on the surface of the crystals absorbs moisture from the air that dissolves sodium chloride. Salt cannot hold more than 3% of moisture in equilibrium. The absorbed moisture with the diluted impurities and with the dissolved sodium chloride slowly flows out of the stockpile and dissipates to the ground...

In addition, due to variations in the temperature and humidity, salt on the stockpile undergoes micro-recrystallization of the crystal surface. Impurities on the crystal surface become covered with solid sodium chloride and the crevices in the crystals, full of impure mother liquor, will get closed. Much of the impurities, originally accessible to purification, will become imbedded inside the crystals. This phenomenon is well known: "Old salt is more difficult to wash than fresh one". (p. 6-7)

An In-Depth Perspective from The Meadow
Not satisfied with what I could find on my own, I decided to ask the salt experts at The Meadow.  Mark Bitterman wrote quite a response entitled On the Purity of Sea Salt.  There are a couple things that I really appreciate in what he says:


As fierce guardians of the ecology in which they practice their trade, artisan saltmakers have a deep and nuanced understanding of the dynamics behind the creation of their salt.  No amount of testing has saved Americans from contaminated eggs, produce, and meat because contaminants are part of the very mechanism of industrial food manufacturing—it’s just a matter of minimizing this contamination.  Artisans practice outside of this logic, with criteria for quality organized around the principles of expert knowledge, hand labor, ecological stewardship, and economic sustainability.  Such wholesomeness is at the heart of good salt, and I guess that insofar as its meets these standards, it is “pure.” This logic might be applied not just to salt, but to all food...

Admittedly, no unrefined sea salt will be utterly free of all the things that naturally occur in the this environment. (Fresh, ice-cold water drawn from a mountain spring water will contain organic matter. Water stored in plastic bottles on supermarket shelves will contain no organic matter–though it may contain Bisphenol A and other chemicals.  Which is better?)  But salt makers will often pour clean ocean brine over the salt crystals as they are harvested to rinse them of any unwanted matter.  In other places, seasonal things like pollen from nearby mountains is considered part of the character of the salt...

This richer understanding that salt is a natural product drawn from a real place is really important.  Salt is more than just sodium chloride.  Salt comes from a place.  We are a part of that place and if we want clean, pure salt we need to be "fierce guardians" of the resources that we use.  This relationship to place is something that I find very important to explore in my own life and is one of the reasons why I started this blog. Who knew salt could be so poignant?

Back to the Business of Salt
So, what I'm actually doing is working on salt batch 2.  The water is collected and waiting to be evaporated.  I started working on it, but given my work schedule and the new baby, it will take a while to go through all 7 gallons.

Although I'm not one to go in for the flavored salts, this time I plan on making some smoked salt.  For dinner last night, I made some pecan wood smoked salt with my PNW BBQ (post forthcoming).  I have to say that the flavor differences between the regular salt and the smoked salt were too subtle for my palette.  But there was certainly a difference in smell.  The smoked salt has a sweet, tangy, mellow smokiness.  It's different and better than I expected.

For those of you that got some salt last time and have asked for more.  Next time I see you, let me know if you want smoked salt or plain or both.
Posted by Jason