Kim's family is in town this week to meet our new little guy.  It's been great having them here, but whenever we have guests from out of town, I always feel like we need to prove to them how great Portland is.  Well, with a brand new baby it's impossible to take guests out and show them around. So, the only thing I could think of to do was to cook dinner.  How much more Portland can you get then having a good, local sourced meal?

BBQ Gone Pacific Northwest
I decided to do a PNW BBQ for our out of town visitors.  Something that would be unique to this place. Something that they could remember as being different than what they could get on the east coast.  Pigs grow everywhere.  So do lambs, cows, chickens, and goats.  I had intended to do my traditional BBQ pork ribs but had a change of heart at the last minute.  It had to be smoked Pacific Salmon.

And heirloom tomatoes (which I have come to love over the past year).

How on earth could I put these together with a live fire of pecan wood into one meal?  I think best under pressure, and after procrastinating until 3pm of the day I had to make dinner, this is what I came up with:

For dessert, Lucille made an outstanding peach pie.

Now I have to admit some things.  Due to the lackadaisical nature of my planning, I was not able to make the entire meal local.  But it mostly was and I've got some good ideas for next time. 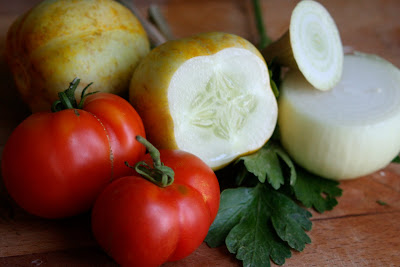 So, if you do not know this already, my favorite place to by vegetables is not the farmers markets.  It is Pumpkin Patch farm on Sauvie Island.  Open every day of the week, this place has a great variety and they source almost all their produce from local farms.  AND they mark where the produce comes from.  This makes it easy to know if you are supporting local farms or if you are supporting importers.  Although I like Kruger's farm very much, when it comes to buying produce I prefer Pumpkin Patch farm by a local mile.  The tomatoes I actually got at the interstate farmers market.  Pumpkin Patch won't have their heirlooms in until September.

Now, this is the one thing that sorta bummed me out.  Since Salmon was the centerpiece of the meal, you'd think it would have to be local.  Well it wasn't.  BUT after I bought the salmon, I saw the native guys selling some amazing Columbia River Salmon at the Interstate Farmer's Market.  If only I'd known! 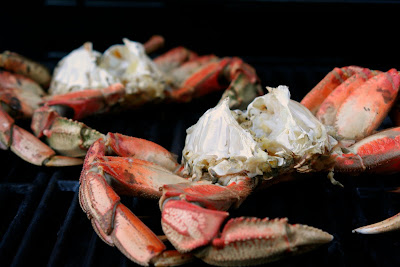 I had an idea and no idea how to do it.  Grilled crab.  Sounds great, no idea how to do it.  Considering the number of cook books I have, I thought a grilled crab recipe would be easy to find.  Well it was harder to find than I thought.  In the end I had to resort to searching the interwebs for a grilled crab recipe.  About.com had a good example that I used as inspiration.  You have to kill the crabs by boiling them first, then clean and grill.  Not hard really--a combo approach that turned out to be delicious. 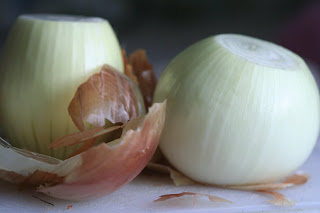 A very long time ago I ate a grilled red onion with vinegar at a bbq party.  It was amazing. Like a hot apple but made with onions.  For whatever reason, that is what I wanted to replicate here.  But, not knowing at all how it was done, I just took my best guess, wrapped them in tin foil and threw them in the smoker, and it worked!

PNW BBQ Results
Overall it worked out really well.  We were a little light on veggies, but oh well.  The salad was fresh and sweet. The onion-salmon-crab combo was delicious.  Lucille's pie was supreme.   In terms of local, I think a little more than half the ingredients were local.  Not so great; the heavy reliance on vinegar and spices really hurt my local rating.  And the darn salmon...if only I'd known!

Here's some pics from the meal: 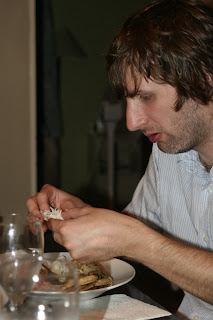 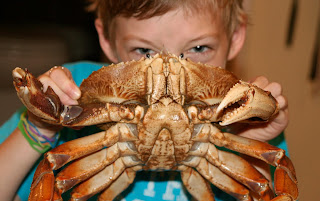 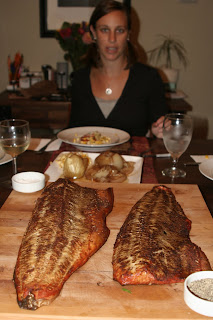 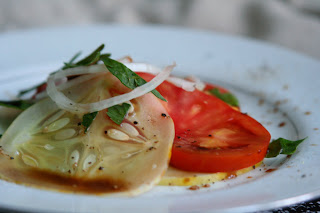 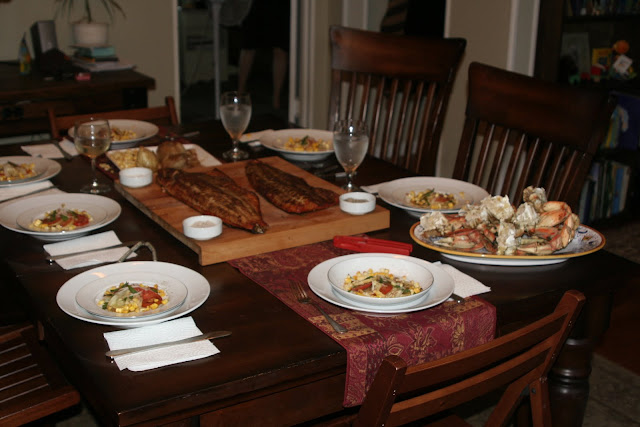