It wasn't easy, but we managed to get through 7 whole days of eating nothing but locally sourced food.

It Was Good Stuff
For all of us, it was a fun family challenge that we all worked on together.

My wife was happy that we ate everything we bought.  We had very little food waste.  We even ate the bread, although it was frustrating and coming out too dense.  My daughter thought the bread was better this way, and when toasted with a little butter, I think so too.

All of us recognized that our meals were more colorful than they typically are.  They were fresher.  They had less sweeteners and no refined sugar at all.  In fact, the only sweetener we used all week was honey.  This could get a little repetitive, but also it was healthier.

It was a learning experience.  Kim and I went out to some of the farms and were able to have more meaningful conversations with the vendors at the market because of it.  Learning about where your food actually comes from was interesting for all of us, even Hazel got into it.

Would you like a side of eggs with that...and that...and that?
Eggs became a central part of our daily diet.  So much so that we ate a total of 3 dozen eggs in 7 days (combined from Noris dairy and Sweet Briar Farms).  Their versatility made them really important.  Eggs scramble with vegetables for breakfast or poached on toast.  Hard boiled eggs are super portable and great for lunches on the go.  Eggs in egg noodle pasta. How did we use so many eggs...I don't even remember.  But by the end of the week, it was 36 eggs eaten.  We had anticipated that we would be relying on eggs more than normal, but none of us expected just how much.

How about some mushrooms with that...and that...and that?
This was more about finding a great deal than anything else.  Springwater farms was selling 6 lbs boxes of chantrelles for $25 at the farmer's market. Consequently, we had mushrooms with almost everything.  The nice thing about mushrooms is how versatile they are and how mildly flavored.  They go with meats, eggs, and vegetables.  They can be a side dish or sauced or the featured flavor.   Having something that could add a flavor layer when needed (especially since we had no spices) was really helpful.

School Lunch: Better than ever!
One thing that we thought would be a real sticking point was school lunch.  This was something that we thought a lot about over the weekend.  A normal sack lunch that we pack for my 4th grader is something like:
Everything except the apples and carrots were off the table.  What we came up with was basically this:
The verdict?  She liked it better that the original! Especially the bread. School lunch turned out to be easier than we thought.

Unexpected Local Gems
There were a few things that were really great. 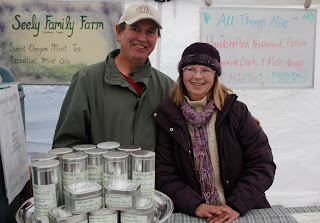 Mint Tea from Seely Family Farm.  With no coffee, we were hoping to find some kind of warm morning drink when we ran into Seely family farm at the PSU farmer's market.  Mike and Candy were running their booth.  They are the nicest people you could meet and make some of the best mint tea I've ever had.  Their peppermint-spearmint blend got us through the week splendidly.  They don't have a website, so if you want to find out more about their tea, call 503-728-4603. 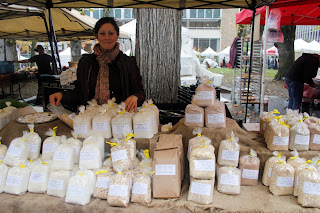 5 Grain Cereal from Gee Creek Farm (aka Gruel).  Although they mill several different kinds of hot cereals, we bought the 5 Grain Flourless mix for the week.  It comes in a 2 lbs bag for $4.  This oat, rye, brown rice, barley, and flax mix turned out to be one of our favorite things to eat.  I made a trip to the PSU market this past weekend just to get another bag.


Scottish Wheat Flour from Eat Oregon First.  We used this flour to make pasta and were really happy with the results.  The texture stayed firm giving the noodles a good bite. I had low expectations because non-durum pasta usually comes out pretty soft, but this wheat was not.  I should have known it would be good when Scot, the owner, told me Pastaworks also buys his flour for their noodles.

The Hardest Parts
Overall, the week was a bit of a shock.  Being constantly faced with very limited food choices was easily the hardest part of all.  Going cold-turkey on any kind of modernized food was a bigger shift than we thought it would be.  No coffee. No chocolate.  No bananas. No pizza.  No ketchup or mustard (it is possible to make this yourself from local ingredients, more about that later). No black pepper or imported spices of any kind.  No prepared foods.  No eating out.  No convenience.  Everywhere you go there are restaurants and easy food--all of which we just had to ignore.  By the time Wednesday rolled around, we were gritting our teeth and forcing ourselves not to order pizza for dinner (which we didn't).

Take for instance, the bread.  Even though I though we had figured out how to make bread, it turned out very dense and generally not so great.  But we had to eat it.  It was all the bread we had.  There was no throwing it out and picking up a new loaf at the store while we worked out the kinks in the recipe.

Another example--I had a work meeting where the client wanted to take me out to lunch.  We went to a deli and they order the most amazing cheese steak sandwiches.  Oh my god they smelled good.  I sat and watched  knowing I had a sack lunch of carrot sticks, apple slices, and hard boiled egg in the car.  It was a killer.

Local week was expensive.  It was shocking how expensive it was.  I understand why this kind of food is more expensive and what that cost represents, but it was still surprising just how much more expensive it turned out to be.  Truly local food is treated like gourmet food and given gourmet prices.  When you drop almost $200 at the farmer's market in one day for groceries for three people, it makes you think twice.  Granted some of those costs were recouped throughout the week because we had to eat home all the time. There are some remedies for this, but that is a matter for another post.

The Best Part, by far
Perhaps the thing that all of us recognized this past week was how eating 100% local brought us all together around the shared experience of food even more.  We normally eat dinner together as much as possible, but this time it was different.  All of us were interested in what dinner was going to be.  We could talk about making it, because almost everything we ate was made by us from scratch, even the hazelnut butter. We could talk about where it came from.  We could point out what we liked about it, complain about the lack of pepper and spices, and laugh about how many times we'd eaten the same ingredient over and over.  Kim said it was almost ceremonial the way we all came together around the food we were eating and preparing.  It gave every meal an extra, deeper dimension that we could all take part in, together.  That was the best part of the whole week.

A Run-Down of Our Week's Menu
Here is a quick summary of what we ate for the week.  I'm leaving out the flowery descriptions because we got a whole week to cover.  You'll see there are some themes.  You could call it repetitive, but really it's the local, seasonal reality.  With more planning and preparation it would be possible to branch out more, but this is what we ate. 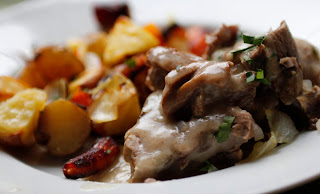 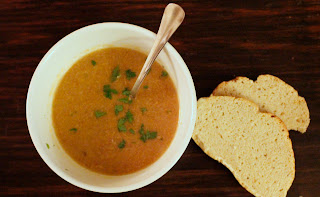 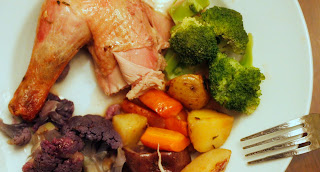 Two Exceptions
There were two items that we did not 100% local source--cheese and olive oil.
We bought 2 kinds of cheese--an aged cheddar from Willamette Valley and a soft farm house style cheese from Fraga farms. Both are local companies that produce their own product using their own milk from animals they raise, but they also use salt and enzymes in the processing that are not local.

We also used olive oil from Red Ridge Farms.  This oil is primarily from olives grown in California and crushed at their mill outside McMinnville, Oregon.  They do grow and crush their own olives, but the volume is still very low and constitutes just a small percentage of the actual oil.  I included this because of my desire to support the fledgling olive oil industry in Oregon.  More about Red Ridge Farms in an upcoming post.

Otherwise, everything else we ate or drank for the entire week was as locally sourced as we could get it.   The grains came from a little further away than the other stuff.

Would We Do It Again?  Yes.
Even though we drooled our way past restaurants and longed for orange juice with breakfast, we would do it again.  With more planning and preparation, the 100% local diet could actually be workable.   Might be a great project for the spring.
Posted by Jason