This post is about A Little Hope Farm in Sandy, Oregon.  I'm writing about this farm because we are getting our turkey for Thanksgiving from them.  We've also bought chickens from them in the past.

The Basics
A Little Hope Farm is owned by Eliza Cannaday and Jeff Hlavac.  It's on five acres in Sandy, Oregon.  Eliza and Jeff live there and do all the work.  They have many animals, but raise Cornish Cross chickens and Bourbon Red turkeys for sale, one small flock at a time.

The Chickens, the Turkeys, and...the Donkey? 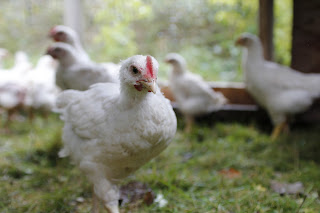 Cornish Cross chickens are not a heritage breed.  I asked Eliza about this.  They'd tried heritage chickens in the past, but it didn't really work out. Americans have a clear idea of what chicken meat should taste like, and that is not how the heritage chickens tasted. "I don't think the American palette is ready for heritage chicken," she told me.  Although Cornish Cross are the most common meat breed of chicken you can buy, the chickens at A Little Hope are strictly pasture raised.  Never crammed into tight little cages--they sleep under the stars, walk around in the rain, eat all the fat earth worms they can find, and live their short 8 week life in about the most ethical conditions you could ever hope for a chicken to have.

The turkeys have it just as good, if not better.
Bourbon Reds are a true heritage breed, and it shows.  They are about as close to a wild turkey as you can get in domestication.  The Broad-Breasted Whites you buy in the frozen meat case at the super market are descendants of this breed.  Bourbon Reds have not been altered to grow fast or get super-sized breast meat.  It takes about 7.5 months to raise a flock for slaughter.  Compare that to the 12 weeks it takes a normal supermarket bird and you can see that this is no get rich quick scheme.  Seven and a half months means these birds have been outside for most of the year.  They arrived with the spring rains, ate worms and grubs all summer long, took dirt baths on hot days in August, and are now fattening up for the coming winter.  They fly out of their pen to roost on top of the chick coop in the evening. They get chased back into their pen by Eliza in the morning.  Good times for turkeys.

One other important feature of the Bourbon Red turkeys is that they can naturally breed. Because they aren't genetic mutants, they can still get to makin' babies when the mood is right. Ohhh-yeahhhh.

"If you are lucky enough to have five acres, you have an opportunity and an obligation to grow for your community."

Five acres is enough, says Eliza, that you can have a small farm with some diversity and enough room for the chickens and the turkeys and goats and donkey and human kids to roam around.

Eliza and Jeff are strong believers in the benefits of diversified small farms over large mono-cultures.  Not only because small batch farming normally results in less sick animals, but also because it leads to more accountability.

"Buy your meat from who fed it," Eliza says.  This is key to breaking the industrial system.  Even organic farming--if it is embedded in an industrial system--does not increase accountability between the consumer and the producer.  It is the industrialized systems themselves that create separation.  This includes large scale operations like Oregon Country Beef where you can have no idea who raised the meat you are eating.  You're required to put your trust in the system and not the people.  This can create loop-holes and gaps that perpetuate the disconnect and reduce the sense of accountability.

It is this sense of accountability--to the animals they raise, their community of neighbors, friends, and customers, the natural world they are a part of--that motivates Eliza and Jeff.

If you know the person you are buying from, if you see where they raised the animals and what it means to them to have a healthy product, then you are changing the way things are done, even just a little bit.

That is the little hope that this farm is built on.

Normally every bird is sold well in advance, so place your orders early.
Posted by Jason