Many of you may know that my family did 7 days 100% local last fall.  While there were many challenges that week, one of the toughest was making bread.  We use a lot of bread--breakfast toast, school lunch sandwiches for my daughter, etc.  Knowing that bread was a key part of our diet and we would not be able to go 7 days without it, we tried to make our own wild yeast bread.  I wasn't great. Edible, but not great.

Now that we are doing the 7 Days 100% Local Challenge again, I knew it would be critical to come up with a solution to the bread issue.  So I reached out to Grand Central Bakery.  Knowing their commitment to local sources, I was hoping they would be into the challenge.  You can imagine how happy I was to get an email back from them saying they were in! 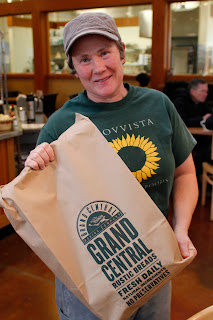 On Thursday, Kim and I were treated to a tour of the main Grand Central bakery.  Mel Darbyshire, their master baker, gave us a tour of the facility and explained how they source their ingredients.  It was impressive the lengths she goes to to support local growers and producers as much as they can.  For instance, they now get 100% of their wheat from Sheppard's Grain.  Their honey comes from Hood River.  They source potatoes from local farms as much as they can.  Mel is constantly on the look out for new local sources that can replace as many of the industrial products as possible.  It's not as easy as it might seem.  Commercial bakeries need quality, consistency and volume.  Not many small farms can deliver on all these fronts.

Mel's commitment to keeping the production of the bread as close to "by hand" was also impressive.  Because of the size of the operation, some automation is necessary.  But the criteria is always to ensure that the product does not become a "machined" loaf.  For instance, only the baguettes and buns are shaped by a machine.  All the other loafs are done by hand.  This is amazing considering the number of loafs that are produced there 24 hours a day.

Another example is the automatic proofer.  Grand Central recently bought a proofer to help proof the loaves.  It was a slow decision for them to do this, as Mel does not believe in rushing the process.  However, do to some specific issues related to air circulation and the layout of the bakery itself, it eventually became clear that a proofer could help out.  However, even though they now have the ability to hurry the proofing process along, Mel chooses not to.  The settings on the proofer are basically the same as the bakery.   Same air temperature.  Same humidity.  The only difference is inside the proofer the environment is consistent from floor to ceiling.  This allows all the bread to proof evenly, and reduces waste while keeping the proofing process itself true. It also allows them to make more loaves overall. 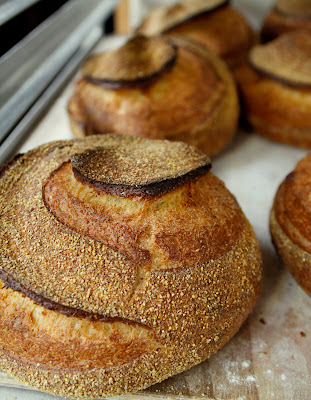 The New 100% Local Loaf
At the end of the tour, we got a real treat.  Mel has created a special 100% local bread loaf.  It's a wild yeast loaf made with a corn levain and subtle honey sweetness.

It's delicious.  Especially toasted with butter.

We were treated to a sample.  Mel is still finalizing the formula, but the results so far cannot be denied.  And it's a beautiful looking loaf.

Once the recipe is finalized, the loaf will be available for sale at all Grand Central locations.  Huge thanks to Grand Central and Mel for a great tour and for taking a personal interest in 100% local food.
Posted by Jason