As we get ready for the next 7 Days 100% local challenge, I'm thinking through all the things that were difficult last time and trying to get ready for them.  Some things were really hard to let go of, like snacks (I eat more snacks than I realize).  Something were easier to let go of, like coffee.  Seely Farm's mint tea was so good it totally replaced coffee for me even after the challenge was over.  And some things seemed like they should not be so hard to do local, like bread and cheese.

Anyone who has been to the farmer's market, or New Seasons, knows that we have a lot of cheese in this town.  Portlanders love their cheese, especially creative cheeses from non-bovine animals.  Goat cheese. Sheep cheese.   I'm surprised someone doesn't make breast milk cheese here.  With all the cheesiness around here, I thought taking some time to track down 100% local cheese would just be a matter of a few phone calls.

Well, I was wrong.

Let's step back for a moment.  Cheese is basically pretty simple. You need milk.  You need an acid to make the milk curdle. You need to separate the curds from the whey.  You need to let it dry to some extent to firm up.  You do more or less of this depending on what kind of cheese you want to make.  If it's so simple, then why no 100% local?  I asked around at the farmer's market and got different reasons, but the answers were the same.  Cheese makers use imported enzymes because they are manufactured to produce consistent results.

One cheese maker clearly thought it was stupid not to use these enzymes in any case.

Other cheese makers though it would be fine to experiment with smaller batches.  For larger commercial production, the reliability of the manufactured enzymes was just too important.

So, if I wanted to have 100% local cheese for local week, I wasn't going to get it from a cheese maker.

(The good ladies at Heidi Ho Vegan Cheeses were very interested in taking on the challenge of making a 100% local vegan cheese.  The only problem was what kind of coagulant to use.  The coagulant they use now comes from plants that grow just off the coast...of Chile.)

To find out for myself if it could be done, I bought a cheese making book.  Found the simplest recipe in the book. And gave it a shot.

I made the Bondon.  With only 3 required ingredients, it seemed like a good place to start. 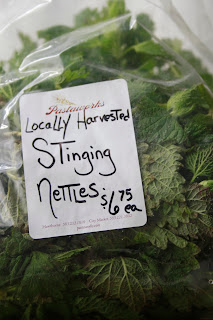 Rennet traditionally made from the lining of a very young cow's stomach.  However, many people nowadays use vegetable rennet.  You buy it in a little bottle and use a very small amount to get the curds and whey to separate.  In the cheese book, there is a little side box that talks about vegetable rennet.  One of the sources for this is Stinging Nettles.  Conveniently, Stinging Nettles grow locally. I got some at Pastaworks on Hawthorne.  After crushing some of these stinging nettles through a garlic press, i got the one drop of liquid rennet I needed for the recipe.  I also got a tingly thumb for the next 3 days.

Now, my goal was to see if all these improvisations would work.  Would fresh pressed stinging nettle juice really act as rennet?  Would the cultured buttermilk really be a good starter?  24 hours later I found out the answer is YES.  They did work just fine for the Bondon cheese.  The cheese was a mild and spreadable.  Sort of like a cream cheese, but with a little tang like a farmhouse goat cheese.  One part I only added salt to. The other I added some garlic powder and dried herbs.  It was very good. 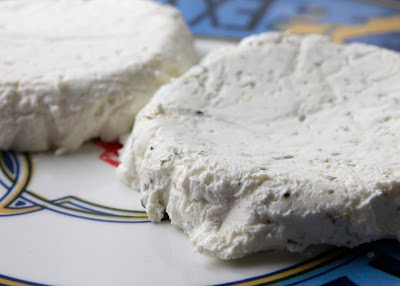 I have no reason to believe they would not work for other kinds of cheeses too.

If you read any recipe for how to make buttermilk they all say to add buttermilk cultures to milk and that makes cultured buttermilk.  That's like saying if you want chocolate milk, add chocolate to milk. It doesn't really help.

Welcome to the Raw Milk Revolution
After looking for a while, the only recipe I could find for truly home made cultured buttermilk is on Dr. Fankhauser's Buttermilk page. If you scroll down to the section entitled "Making Cultured Buttermilk from Scratch" you will see the recipe.  The risky part is that making cultured buttermilk requires starting with raw milk.

Raw milk is not legal for commercial sale in many places.  The Campaign for Real Milk is one organization that is all about getting people to drink more unpasteurized milk.  They have a long list of Oregon dairy farms that sell raw milk, and many of them are right outside Portland.

Raw milk is something that I know little about and have heard mixed opinions about, so I decided to do some research.

Overall, of the articles that I read, the case of the Hartmann Dairy in Minnesota seems a great example of the conundrum of raw milk.    In a nut shell, 4 (possibly 5) people got sick from the milk at Hartmann Farm.  Investigators know it was from the same farm because they used fancy scientific tests to isolate the bacterial DNA and wrote a report about the Hartmann case.  This resulted in the state of Minnesota placing an embargo on products from the farm.

Well, the Hartmanns strongly disagree.  Citing that none of the dairy or animals tested on the farm had any form of e.coli present, they feel like the state has done a bad job and hurt the reputation of the dairy.

The crux of the situation, in my mind, is summed up nicely in the article:


In many cases, says the fact sheet, only particular batches of product may have been contaminated. And because in many cases, perishable products have already been consumed, they aren't available for testing.

This is the difficulty of the raw milk debate.  A couple people get sick.  The evidence is hard to find because of the perishable nature of the product.  The state does some tests.  The farms refute those tests.  It's hard to tell what the real situation is or what your risk as a general consumer is.

No one denies that raw milk has a chance to contain e.coli and other bad bacteria.  Maybe that chance is very, very small.  Maybe it is so small, that it does not bother some people.  I am normally up for a food adventure, and if it was only me, then this would probably not be an issue.  However, when it comes to my kids, I'd rather play it safe.  Health insurance is great, but I don't want to test it.

So, this puts truly 100% local cultured buttermilk out of the question, and with it goes the option of 100% local cheese.  We'll have to settle for 99% local cheese, I guess.  Unless someone out there knows of a 100% local source for safe buttermilk in the Portland area, this case is closed.

I'll still be making cheese for local week.  It's pretty darn close to 100%.  But that is part of the project, right?  Find the gaps. Find ways to fill them.

Someone out there can safely make 100% local cultured buttermilk, I'm sure of it.  I just have to find them...
Posted by Jason