It was time again for our annual birthday barbecue.  Time for bags of hard wood, pork shoulders, and a little Buckwheat Zydeco

. Every year Kim and I have a big get together with our friends to celebrate our birthdays, the start of Summer, and the beginning of barbecue season.  The normal activities ensue--buying bags of hardwood for the smoker, tracking down two Boston Butts, checking how much brown sugar and apple cider vinegar is in the house, scrubbing the back deck, etc.

Central to this party, is the barbecue.  When I say barbecue, I mean pork that is smoked for hours, shredded, simmered in sauce, and served on a bun.  Later in the summer we'll have our annual rib barbecue.  But for our birthday its always pot-luck, and I smoke some pork butts.  Since this is a food blog, let's get right to the goods.  Here's what we made for our party this year:

Pulled Pork Sandwiches
This year I'd planned to do something a little different.  Last fall I got a whole pig.  In the process of butchering it, we specifically left one shoulder whole just for this event.  That's a 20 lbs piece of meat!  Normally the shoulder is cut into the Boston Butt and the Picnic Ham, but this time I wanted to keep it all together and do one big, glorious smoke out!  And make this the first year we do 100% local meat in the bbq.

Unfortunately, I didn't plan things well and the shoulder didn't defrost in time.  However, there was a single Picnic Ham that I was able to get defrosted, so we did half local.  The butts came from Costco which is where I normally get them from.  I've looked into other places in town for local meat, but none of them sell whole butts at a price that is reasonable.  Considering we're talking about a 8-10 lbs chuck of flesh, getting 2 or 3of these can get expensive if you are paying $4-$5 per pound for local meat.

Anyway, in my experience, running the smoker around 250 means keeps the cooking time at around an hour a pound to get to an internal temp of 185-190.  So, for an 8 lbs shoulder, you'll need 8 hours of cooking time at 250.  This will produce a nice crust, a quarter to half inch smoke ring, and make the meat soft enough for shredding with forks.

For the pulled pork, I use my own rub which is a modified version of a Memphis style rub I found online.  The print out I have actually says the original rub recipe comes from The Barbecue Bible

, but I checked my copy and couldn't find it. 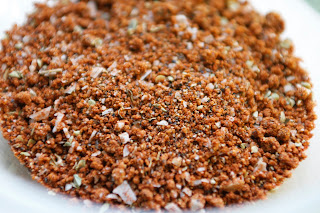 This is my "magic powder" (a la Mike Mills).  I altered the original with the garlic powder, oregano, and chipotle powder to give this rub a touch of herbiness and a little more heat.  The sugar-paprika-pepper combo is pretty normal barbecue flavors and seemed too dry to me, especially for Oregon.  To alter this rub for fish or chicken, just reduce the paprika and black pepper and increase the garlic and oregano.


Once the shoulders have smoked and are all tender and black, I take them out of the smoker and shred them down with forks. This can be a time consuming process, but it really does produce better results that chopping the meat.  Then I simmer the meat for at least 30 minutes in a ketchup vinegar sauce, pretty much following the recipe for North Carolina Pulled Pork from The Barbecue Bible

.  I'm not much for barbecue sauce, but the sweet-hot tang of the vinegar sauce combined with the salty-sweet crust of the rubbed pork makes for outstanding pulled pork. 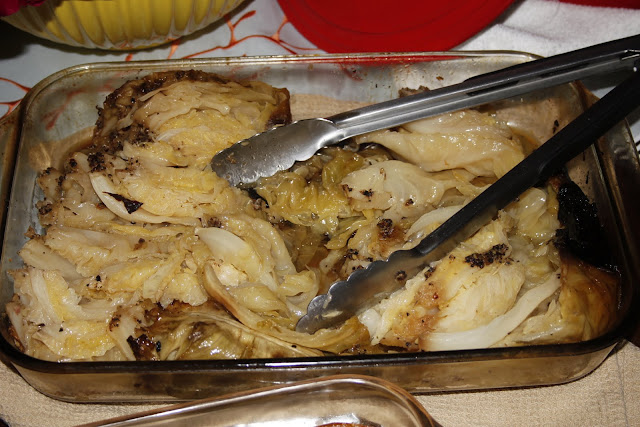 Last year, while looking for something different, I found a recipe for smoked cabbage in The Legends of Texas Barbecue

.  My first thought was "gross." My second thought was "cabbage is cheap".  My third thought was "I'll give it a try if I have room in the smoker".  It was outstanding.  If you haven't had smoked cabbage, I highly recommend it.  Uncle Kermit's Barbecued Cabbage is outstanding and simple.

Make a spiced butter and pack the entire stick into the core of the cabbage.  The cabbage will groan and seem like it's going to burst from the butter.  Wrap in tin foil and stick it in a smoker for a couple hours.  Cut into wedges and serve.  Wonderful. 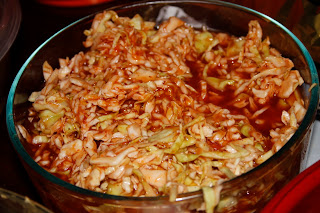 Normally I don't do cole slaw.  I just don't like it that much.  But this year it seemed like a good idea, just as an experiment.  To match with the vinegar sauced pulled pork, I found a vinegar based cole slaw recipe in Peace, Love and Barbecue

.  The Lexington Barbecue Red Slaw recipe was a good match, especially since I added a little too much chipotle pepper to the first batch of pulled pork.  Cole slaw still isn't my favorite thing, but this was about as good as I could ask for.  Note:  make this the night before so it has time to marinate.  Otherwise, it just tastes like cabbage and vinegar.

Potato Salad
Kim made potato salad.  She found the simplest recipe and it turned out great.  She looked through several options and then found Mama Faye's Home-Style Potato Salad.  This turned out to be another hit from Peace, Love and Barbecue

Beyond that, everything else was provided by the people who showed up. In normal pot-luck style we had all sorts of goodies to choose from and they were all delicious.

Here are some random pictures from the barbecue and some of the people who showed up to help us celebrate our birthday...and eat! 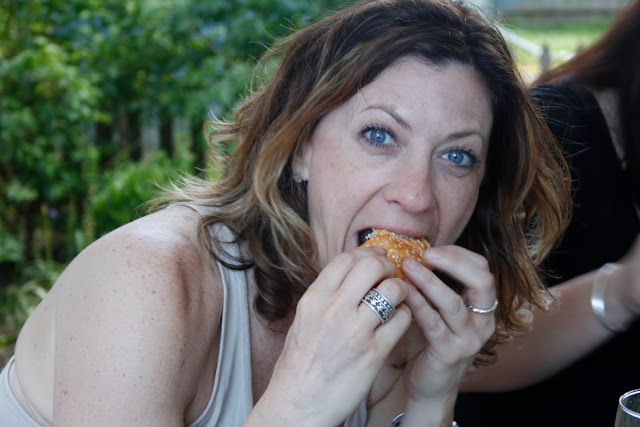 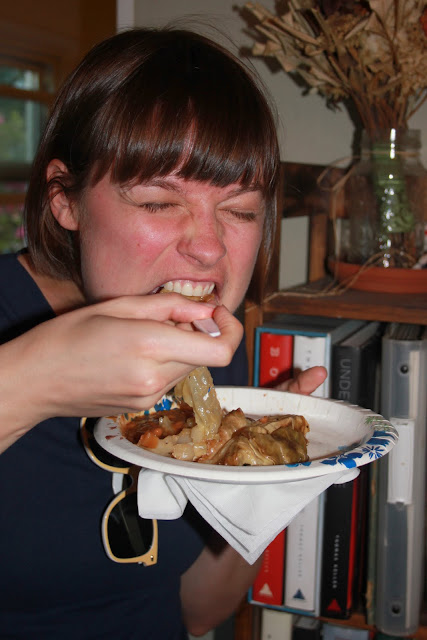 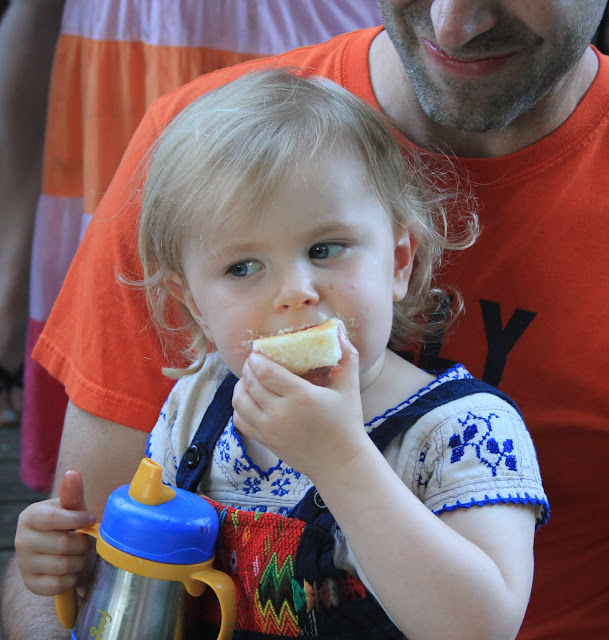