Don't forget to take the Local Food in Your Life survey. Results posted at the end of the month.
Last week I spent 24 hours in Philadelphia.  I've been unsure what to say about this experience.  On one hand, you have all the historical things.  Philadelphia is truly the birth place of our country.  The First Continental Congress.  The Declaration of Independence.  The home town of Benjamin Franklin.  George Washington had a house here.  In 1776, Philadelphia became the birth place of freedom and the American revolution.


Not only is it the birth place of freedom, it is also the birth place of the maximum security prison.   In 1829--just 53 years after the cause of freedom and liberty was struck--construction was started on Eastern State Penitentiary.  This building would become the model for more than 300 subsequent penitentiaries around the world.  Ironically, the architect of the prison conceived of his vision for the prison while having dinner at Benjamin Franklin's house.

There really is a statue of Rocky, and the "Rocky Steps" leading up to Philadelphia Art Museum are a tourist attraction unto themselves.  The statue of Rocky seemed silly to me at first, but after spending a day in Philly, it started to have a meaning.  I get the sense that this is a city that needed a modern hero.  There are so many statues of dead people who did amazing things in Philly a long time ago.  It is a city living in the shadow of itself.  It's an interesting juxtaposition to think of the modern hero Rocky in comparison to historical heavy weights Franklin and Washington.  One city--how times have changed.

The cheese steak is as much the local food as Rocky is the local hero.

I ate four cheese steaks in my time in Philadelphia.  Unfortunately, none of them were from Geno's or Pat's.  Jim's on South street had a line around the block in the rain, so I decided to pass.  The cheese steak I got from George's in Reading Terminal was undoubtedly the best of the ones I did get.  But, they were all generally the same:

If you like a little gastronomy with your history, there is one place definitely worth checking out.  The City Tavern is the tavern that the founding fathers hung out in.  Now restored, they offer a colonial style menu, but more importantly they have Ales of the Revolution (from Yards Brewing who makes a mighty good IPA).  You can drink the beers that founded this country! 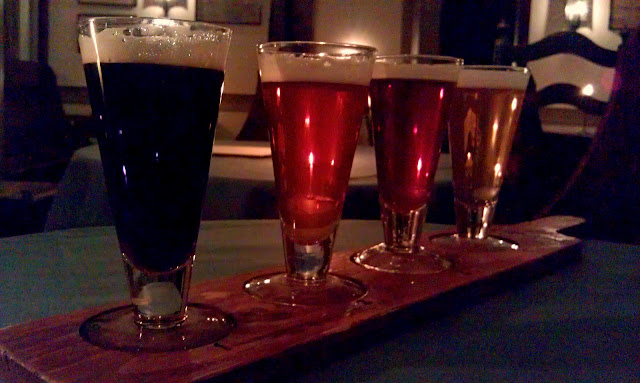 George Washington's Tavern Porter.  Based on a recipe on file in the Rare Manuscripts Room of the NY Public Library.  Although it's labeled a Porter, seemed more like a CDA.

Thomas Jefferson's 1774 Tavern Ale.  Jefferson's original recipe. Apparently he was a home brewer.  This one seemed more like a smooth american style amber.  A bit of hops, some spruce flavors, with a clean finish.

Poor Richard's Tavern Spruce.  Franklin's recipe actually written when he was in Paris.  Very smooth, almost like a cream ale. No hoppiness at all.  Vanilla and a hit of molasses.

Alexander Hamilton's Federalist Ale. A light ale that I assume has some connection to Hamilton.  Very light in color but hoppy--almost like a fresh hop ale.  I thought there was a hit of walnut flavors in there somehow.

If you have 24 hours in Philadelphia, here are some things to do:


View 24 Hours in Philly in a larger map

Email ThisBlogThis!Share to TwitterShare to FacebookShare to Pinterest
Labels: Cheese, On The Road