Some men reach a point in their life when they realize happiness is something you have to make for yourself.  It doesn't come in a box.  It isn't something milled and standardized. It's about making every bite something to remember.  It's about throwing away the little glass bottles and using your hands to grab what you need.  It's about sharing sustenance with friends and loved ones.  It's about pulling rock from the ocean because that is what you love to do.  It makes your life better.  It makes your loved ones' lives better.  In fact, everyone who is touched by it is better off.

Benjamin Jacobsen was certainly not an unhappy man.  Like almost everyone else in the modern world, he thought life was just fine.  That little shaker on the table was good enough.  Silver topped.  Iodine enriched.  A smooth and consistent pour.  Maybe his wife did not know the passion she would unleash that fateful night when she finally got Benjamin Jacobsen to try Sel Gris with his dinner.  Preposterous! thought Benjamin Jacobsen.  $7 for a tiny thing of salt.  Ridiculous!  Then he took one bite.

"It's so easily overlooked, but it makes all the difference in the world."

The difference between table salt and Sel Gris is important and recognizable.  That night became a turning point in his life.  It sparked a passion that would eventually become more than just an interest or a curiosity; it would become his work. 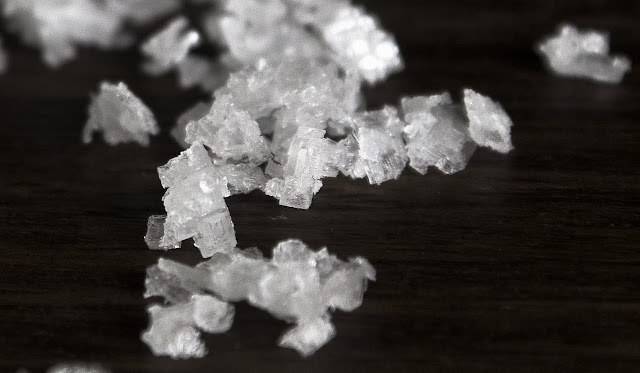 At first, he would seek out the fine salts.  Handmade salts.  Delicious exotic crystals.  The passion was started. He started carrying a little jar of salt in his suitcase on business trips.  He started bringing his own salt to restaurants.

Then he began making his own salt.

Soon he was taking the ocean with him.  Canoeing with friends he'd grab a gallon of water to bring home.  A beautiful day at the beach with his wife, and a gallon to bring home.  At a wedding party in La Paz, Mexico, and Benjamin Jacobsen is carrying a slice of the Sea of Cortez into the kitchen. 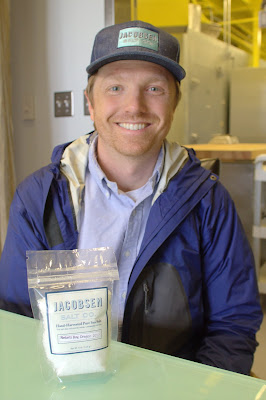 "It was amazing," says Benjamin of the salt he made in La Paz.  "It really does have a different taste. It's so much better than what you get normally."

Today, Benjamin Jacobsen is pulling rocks from the ocean.  He is sharing with friends.  He is making every bite better.  1000 gallons a week.

"I want to make the best salts in North America, and we're well on our way to doing that."

Don't let the little bag fool you.  This is a salt you grab with your hands.  Crunch it in your mouth.  Taste a slice of the ocean, direct from Oregon and Jacobsen Salt.

Available in the spices area at New Seasons, among other places around Portland.
Posted by Jason