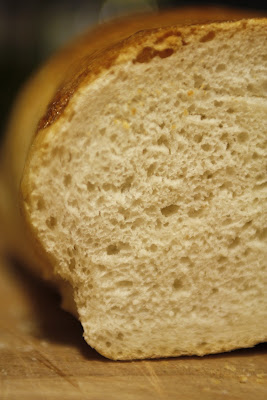 A couple weeks ago, my family decided that we would try to go seven days eating only local food.  This means that everything we eat for that week must be locally sourced (not just locally produced).  I wasn't sure how difficult this would be, but I knew it would  be a challenge.  In thinking through what would be required to do this, I quickly realized that one of the biggest hurdles would be grain products, especially bread.   We eat a lot of bread.  Somehow this had to be solved in advance.

I started with trying to find the simplest bread recipe I could.  I knew ingredients would be limited.  Richard Olney's white bread recipe (The French Menu Cookbook) seemed about as simple as you can get.

Nothing could be simpler.  I make the Salt.  Flour can be sourced locally.  The only issue here was the dry yeast.  How do you find local yeast?

The Yeast is the Key
Doing some research I found there are several types of yeast.  I won't go through all of them, but pretty much every bread recipe I found called for active dry yeast.  This is the most common stuff you find in the store.  I comes in little packets.  There is regular and quick rising.  It is easy to use, reliable, and quick.  But it is not local.

The only way to get around the active dry yeast issue I could think of was to find a recipe written before those little tin packets were around.  Bread's been made for thousands of years, but Fleischmann's has only been around for the past 140 years and Fleischmann's active dry yeast was a World War 2 invention (source).

I had to go real old school.  Pre-war.  Pre-industrialized food.  I turned to Miss Tracy's New Cook Book, 1908 edition.  I found a whole bread section in his tiny book, and even through the pages are literally falling out of my ancient copy, there were several that could have worked very well.  The only problem was the Miss Tracy really likes to use "compressed yeast cake".  I have to admit, I had no idea what that was. Wikipedia gives a definition for compressed yeast.  The closest I could come up with that you can actually buy is fresh yeast.  But this is again, not local and I wasn't even sure if it was really the same thing. 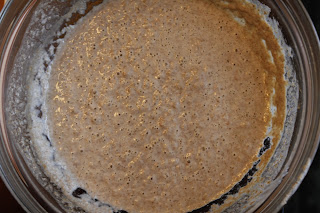 So I went off the grid.  There had to be a way to make my own yeast.  The stuff is everywhere--like pollen or dust or any of the zillion other microbes that surround us all the time which we don't realize.  What I found was that making yeast is actually kinda simple and can be done with 100% local ingredients. I used these instructions which call for pineapple juice, but substituted some juice from local apples and called it good.  A week later, I had my yeast goop and was eager to test it out.

Let the Experiments Begin
Local wild yeast is traditionally what is used to make sour dough bread.  That is why San Francisco sour dough has it's own taste.  It's made with the yeast that is in the air in San Francisco.

Using the sour dough method from The Bread Baker's Apprentice, I gave it a shot. Now, I suck at making bread. So I was not surprised when the first batch came out like a pair of 100% whole wheat bricks.

In the the second batch I started working in some unbleached white flour but it still came out very very dense.

Doing some reading I found that the dough needed to be kneeded a lot to break down the gluten.   White flour breaks down much quicker than whole wheat so if I increased the ratio of white flour to whole wheat it should get easier.  Peter Reinhart talks about the window pane test as a good way to tell when your dough is kneeded enough.
For the third recipe, I modified Reinhart's recipe for french bread by substituting the yeast goop for the packaged yeast as described in the book.  My lovely wife supervised (she's a much better baker than I am).  I kneeded the crap out of the dough. After making the new dough and yeast goop almost entirely out of white flour, the dough was finally able to pass the window pane test.  It rose very nicely.  We proofed it into loaves and baked it later that day. 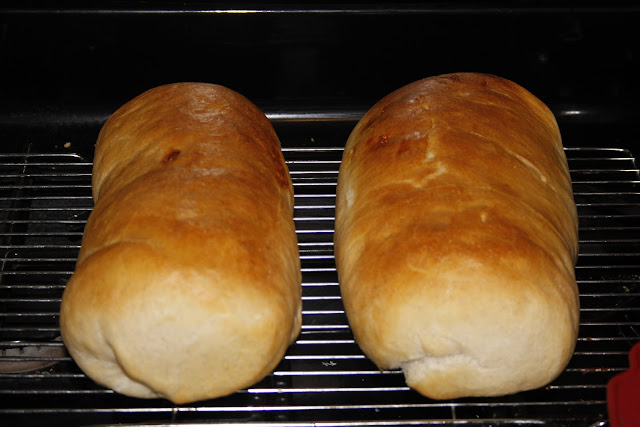 Not the most beautiful bread, but these were actually edible!  The crust was crusty.  The middle was chewy and had some air bubbles (see the top image).   We could cut through it without needing a hack saw.  Success!

I'm feeling much more confident in our ability to do the seven days local challenge.  Now that we can make 100% local bread, I think we're good to go!  Hopefully we can find some vegetables this late in the year...
Posted by Jason