A Little Bit More About Cheese--My Last Blog Post Ever?

I previously wrote a post about trying to make 100% local cheese.  At the time it was all I could do to make 99% local cheese because of the issues with finding a mesophilic starter.  Buttermilk was the best substitute I could find, but even that has small amounts of added cultures which make it not 100% local.

However, there other ways of making cheese that do not require mesophilic starter and rennet.  I'm thinking about something yellow...something yellow...Lemons!  That's right, lemons can be used to make a few kinds of soft cheeses, most notably, lemon cheese.  The acid in the lemons curdles the milk making it possible to separate the whey from the milk solids and there you have the start of a cheese.

Skeptical of the outcome, I tried one of these lemon cheeses and it was...okay.  The baby liked it (but he also likes plain tofu with prunes).  Probably if I'd added some salt and spices the taste would have been better, something I'm learning about every kind of soft cheese.  But, since I'm a bit of a deconstructionist when it comes to cooking, I had to start with plain first just to understand the underlying flavor structures (yes, I have been finding ways to combine my degree in literary theory with cooking).

One problem with making lemon cheese is that lemons do not grow well in Oregon.  It's just too freaking cold here for those sun-loving tarts.  That could be a problem...unless you have a green house.  Which is exactly what the people at Raynblest Farm have.  They were the only people at the PSU farmer's market to have lemons, and that continues to be true (as far as I know).  Thank god for them.  They never have very many, but if you are there early, you can get them.  And some very nice honey too.  And three kinds of prunes.


If you don't want to depend on the whims of the market, growing your own lemons is pretty easy for anyone reading this blog, because I'm betting that if you have internet access you also have central heating.  And if you have central heating, then you can keep a lemon tree in a pot in your house.  Planting it outside would kill it, so don't do that.  I bring this up because Graceful Blades is selling Meyer lemon trees at the Hillsdale Farmer's Market.   The wonderful thing about these trees is they can be trimmed to be whatever size or shape you want them to be.  That way they don't have to take up any more space than the average ficus, but with lemons.

So, this isn't meant to be a 100% local post, but one more thing.  I had also previously written that thistle juice was a viable alternative to liquid rennet.  Well, I've tried this a couple more times and found out that...it's totally true!  AND it keeps in the refrigerator.  The only "however" is that you need to use a little bit more than what the recipe calls for.  For instance, I made Bondon cheese first and it worked great.  Then I tried to repeat the recipe and it completely failed because the milk never properly separated and I was left with a weird sort of slimy yogurt.  But I tried it again this week using twice as much rennet as the recipe calls for and it worked great!  So, that is my current theory--the thistle juice is not quite as strong as real rennet so you need to use more. In my case, I used two drops of rennet to one quart of milk instead of one drop of rennet.  The cheese turned out really good (with some added salt, garlic powder and herbs).

Now, if you would like to make your own thistle rennet, here is what worked for me.  Buy (or gather) a bag of thistles.  One bag cost me about $4 at the farmer's market. Stick them in a food processor and grind them down until they are a wet messy paste.  This will take a little while and you'll need to stop periodically and use a wooden spoon to mix it around.  Once it's as pasty as you can get it, scoop it out into a fine mesh sieve and press to extract the juice.  You want only juice and no solids, so use the finest mesh thing you can find.  Pour the juice into a glass jar and keep in the refrigerator.  I don't know how long it will keep, but mine's been in there of a couple weeks and seems fine.

One bag of thistles yielded a little less than 2 oz. of black, gross looking liquid.   But because each cheese recipe only calls for a few drops of rennet at a time, this should be enough to make many many pounds of cheese.  As long as it keeps in the refrigerator, this little bottle of liquid black gold will last a long time.

Unfortunately, I won't be able to use any other that rennet because today is May 21, 2011 and the rapture is happening this afternoon.  So, it's been a nice time eating and blogging.  Thanks for reading.  For everyone left behind, good luck with the thistles.
Posted by Jason 1 comment:

We actually finished the 7 days last week, but I've been kinda slow in writing about it.  It was a good time.  Some other families joined us which made for a new dynamic.  The social part of it made it more fun, and helped with supplies.  But just talking about the challenge with other people was interesting to me.  If you take a hair-brained idea and put it out there, you can get some pretty neat stuff.

Anyway, moving on to our week.  It was pretty good.  It was easier than last time.  I already wrote about the yogurt issue.  That was the big lesson for this week.  We didn't have the shock of the limits of local food; we knew what to expect.  We knew how to find most of what we needed.  But the devil was in the details.  How local is local?  When is it okay to bring in outside things?  What is reasonable?  Those were the things we dealt with, mostly around fermented dairy products.  One surprise was that I didn't really miss spices as much as I thought.  If you have salt, butter, and/or garlic, you can make most anything taste pretty good.  Having lemons was nice too.
Things we really liked this time
One really good thing we found was the corn grits from Gee Creek farm.  Kim used these to make polenta a couple times and it was really good.  So easy and a perfect base for all kinds of stuff.
Another treat was the blueberry pancakes on the last day.  I don't know how Kim figured this one out, but they were great.  No baking soda meant they were a bit flatter than normal buttermilk pancakes, but that was fine with me. 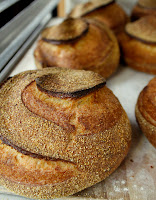 The rock fish from Linda Brand was really good.  After this meal, we decided we need to eat a lot more fish.  At around $9 per pound, the price wasn't bad and the quality was excellent.
Fruit roll ups from Raynblest Farm.  These were a great find.  And these are the people who had meyer lemons also. Raynblest Farm mainly sells honey products, but their fruit stuff was a real treat for us.
100% local corn levain bread from Grand Central Baking.  A great loaf of bread that seriously made the week so much easier.  Bread is such a fundamental food.
Here is a run down of what we ate this past week, with some pictures.:
Monday
B: Oatmeal with honey, mint tea
L: Nut butter and Jelly Sandwiches
D: Sauted fiddleheads, blackbeans and spinach with garlic.  Potatoes au gratin.
Tuesday
B: Gruel.  Mint tea, strawberry yogurt, toast
L: Sandwichs, hard boiled egg, apple
D: Roasted chicken with potatoes and carrots.  Spinach salad with pears, cranberries, and lemon cheese.
Wednesday
B: Scrambled eggs, gruel, toast, tea
L: Sandwich, hard boiled egg, popcorn, apple
D: Kate and Ian came over and brought Quiche.  We made polenta with mushroom cream sauce.  Rogue beer. Spinach salad.
Thursday 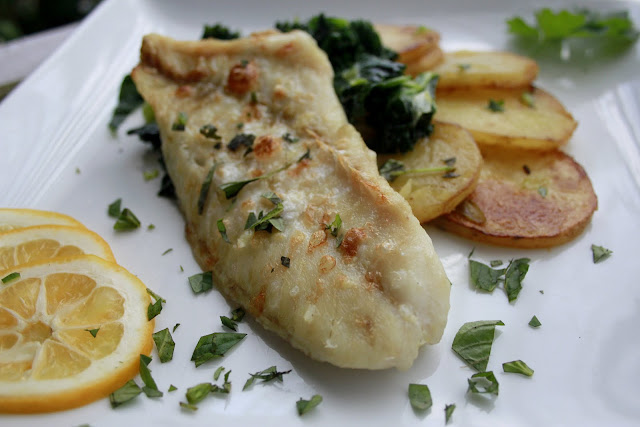 School Lunches--!00% No Problem
School Lunches were not a problem again. My daughter usually likes local week lunches better than her normal lunches, in face.  In general, we just pack these items, more or less, each day.
Sandwich (hazelnut butter and jelly)
Hard Boiled Egg
Carrot sticks
Cranberries
Yogurt with fruit
Fruit roll ups
Popcorn
Honey Sticks
The baby had these foods this week, mixed around at most every meal.  We found out he loves black beans, which is pretty neat.
Posted by Jason 1 comment: